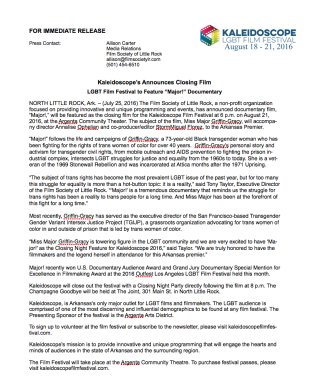 NORTH LITTLE ROCK, Ark., – (July 25, 2016) The Film Society of Little Rock, a non-profit organization focused on providing innovative and unique programming and events, has announced documentary film, “Major!,” will be featured as the closing film for the Kaleidoscope Film Festival at 6 p.m. on August 21, 2016, at the Argenta Community Theater. The subject of the film, Miss Major Griffin-Gracy, will accompany director Annalise Ophelian and co-producer/editor StormMiguel Florez, to the Arkansas Premier.

“Major!” follows the life and campaigns of Griffin-Gracy, a 73-year-old Black transgender woman who has been fighting for the rights of trans women of color for over 40 years.  Griffin-Gracy’s personal story and activism for transgender civil rights, from mobile outreach and AIDS prevention to fighting the prison industrial complex, intersects LGBT struggles for justice and equality from the 1960s to today. She is a veteran of the 1969 Stonewall Rebellion and was incarcerated at Attica months after the 1971 Uprising.

“The subject of trans rights has become the most prevalent LGBT issue of the past year, but for too many this struggle for equality is more than a hot-button topic: it is a reality,” said Tony Taylor, Executive Director of the Film Society of Little Rock. “‘Major!’ is a tremendous documentary that reminds us the struggle for trans rights has been a reality to trans people for a long time. And Miss Major has been at the forefront of this fight for a long time.”

Most recently, Griffin-Gracy has served as the executive director of the San Francisco-based Transgender Gender Variant Intersex Justice Project (TGIJP), a grassroots organization advocating for trans women of color in and outside of prison that is led by trans women of color.

“Miss Major Griffin-Gracy is towering figure in the LGBT community and we are very excited to have ‘Major!’ as the Closing Night Feature for Kaleidoscope 2016,” said Taylor. “We are truly honored to have the filmmakers and the legend herself in attendance for this Arkansas premier.”

Kaleidoscope will close out the festival with a Closing Night Party directly following the film at 8 p.m. The Champagne Goodbye will be held at The Joint, 301 Main St. in North Little Rock.

Kaleidoscope, is Arkansas’s only major outlet for LGBT films and filmmakers. The LGBT audience is comprised of one of the most discerning and influential demographics to be found at any film festival. The Presenting Sponsor of the festival is the Argenta Arts District.

To sign up to volunteer at the film festival or subscribe to the newsletter, please visit kaleidoscopefilmfestival.com.

Kaleidoscope’s mission is to provide innovative and unique programming that will engage the hearts and minds of audiences in the state of Arkansas and the surrounding region.

About Film Society of Little Rock

The Film Society of Little Rock is a grassroots, 501(c)(3) non-profit organization focused on providing innovative and unique programming and events that will engage the hearts and minds of audiences in the City of Little Rock, State of Arkansas, and the surrounding region. Our year-round programming includes two principle festivals; Fantastic Cinema and Kaleidoscope, as well as, film series and individual screenings. For more information visit: filmsocietylr.com.

Kaleidoscope celebrates the diversity of the LGBT community and filmmakers by presenting poignant and thought-provoking films documenting LGBT lives truthfully and with respect. The festival exhibits the power of film to transform lives and opinions of those both inside and outside the LGBT community through the universal medium of the cinema. Kaleidoscope is Arkansas’s only major outlet for LGBT films, as well as LGBT filmmakers. Kaleidoscope 2016 will be held August 18th through August 21st in North Little Rock, Arkansas.  For more information visit: kaleidosocpefilmfestival.com.