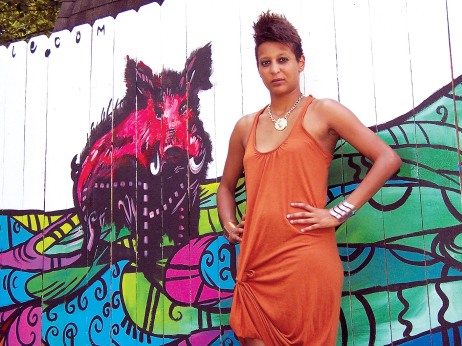 Little Bread Company in Fayetteville is unusually crowded. Joelle Storet isn’t going to get lunch, but she doesn’t seem to mind.

It’s the first Sunday after the University of Arkansas has resumed classes, and it seems that the artisan bakery is feeling the sudden influx of students. No tables are available, so the artist arranges herself on a hard, narrow bench outside the business next door, folding herself into a half cross-legged, half knee-up position. Her arms are leisurely draped over her lanky legs, and she sits tangled but completely at ease.

Storet has grown accustomed to speaking with strangers. Her murals are splashed across Northwest Arkansas, and students, some sitting at the restaurant, regularly wear her designs on T-shirts. Her painting of Coach Nolan Richardson fetched the highest price of any item auctioned away at this year’s Arkansas Support Network’s Summer Gala, and at $1,100, was her greatest charitable earning to date.

Several friends and fans stop to say hello to her over the course of an hour. She is happy to speak with everyone and puts them at ease immediately. Unfazed by the interruptions, she remains in a state of repose, as if relaxing on her couch at home.

But not all of her is still.

Storet’s eyes never rest. They seem to look everywhere, recording images of the environment around her like a series of snapshots, gathering pictures and building a personal gallery to pull from later.

They scan her memories too, looking back at her past as if these moments in time are playing in front of her eyes. As she starts to talk about copying her mother’s drawings, her languid hands being to instinctively move, creating an imaginary drawing on a paper that isn’t there.

Her fingers manipulate the air as she talks about high school art classes. Her eyes light up as she remembers teacher John Remmers and painting the mural in the school office. Her gaze moves on to college and her first commissioned murals. Her eyes become more animated, excited, happy.

And her hands continue to paint.

I’m not afraid. I draw for myself in the first place.

For most locals, the introduction to Storet’s art likely came from a simple trip down the bike trail. Between North and Cleveland streets on the Scull Creek Trail is a white fence. At least, it used to be white until she got to it.

It is now a menagerie of bold colors: purples, blues and greens creating a cubism-esque field. And atop that vivid terrain sits a conquering Razorback. The triumphant hog stares down passing bicyclists and runners and clearly considers itself to be the No. 1 pig.

Except, he wasn’t the first Razorback on that wall.

In February, a previous cartoon Razorback became the victim of a vandal, finding itself covered in pink paint to the horror of all who loved the painting.

“I think other people were much more upset about the vandalism than I was,” said Storet with a laugh. “I mean, I didn’t realize how many people really liked that first Razorback. It didn’t really bother me as much. I told people not worry and I’d make another one. … I mean, it sucks. But I got vandalized.”

Storet covered the smudge with a new Razorback, but it wasn’t alone. Next to the new hog, Storet painted the words “Never Yield,” homage to both the University of Arkansas’ athletics motto and one of her personal beliefs. A second Razorback remained on the wall for several weeks before she decided to paint the more colorful scene.

“This is what happens sometimes, so I put ‘Never Yield’ up there, and it was a major in-your-face,” she said with a smirk. “You never yield. You never back down. Never take no for an answer. In fact, someone saying no is probably the best thing that can ever happen to you. You still get to choose whether you’re going to do it or not.

“If someone says no, I usually do it anyway.”

She tested me, I tested her. She pushed me to be better that what I am.

Although Storet isn’t being told no very much these days, there was a time when she was under someone else’s direction.

“Joelle was very talented, but she was also very independent,” said John Remmers, retired art teacher at Fayetteville High School. “She would often go beyond the boundaries. She had an incredible amount of vision and a great deal of talent. She often had some difficulties with the challenges I presented her because she would think of other ways to solve them — things I never thought of.”

Remmers taught Storet for three years and introduced the teenager to mural paintings. In her first year in his class, Storet created a blueprint for the senior class’ mural and entered it into the school’s annual competition. She would do the same the following year, and each time her work would be chosen over those years ahead of her.

“That was when the murals came in, when I was in that class,” she explained. “The senior art classes could paint murals around the school. I remember them telling us that we were going to do a big mural, and I remember thinking how it was a big painting and how everyone would be amazed by it. I loved that idea. I knew I wanted to do it.”

But it was often a challenge to direct her drive, particularly in the class. Remmers worked hard to present her with a new perspective on her artwork, which didn’t always set well with her.

“We had some hits and runs there, but he’s always been very supportive,” she said, shaking her head as she remembered. “We had a very close relationship. He is a wonderful man and was an amazing professor.”

“We went through a lot of times when she and I hit heads,” Remmers concurred. “It was because I had specific problems that I wanted the students to solve visually, and she would come up with solutions that were beyond what I had conceived.

“In the long run, her solutions were the best,” he conceded.

Now I think German is pretty cool. I didn’t think that way when I was 7.

Storet’s talent for art began long before her years in Remmers’ art class, but it wasn’t always an effort of pleasure. In fact, it was a coping device.

“I was thrown into the fire here,” she said. “I do remember when I went to Holt Middle School, I didn’t speak a word of English. It was awful. Luckily, the principal spoke fluent French, so that was helpful. He was very supportive. I think the drawing is what got me friends.”

Storet and her family moved to Northwest Arkansas from Austria in 2000. Not speaking a word of English, the preteen bypassed typical language school and went straight to normal classes. These times were difficult for her, she said, but her drawings helped her cope.

“If you want to speak English, you have to communicate very well,” she said. “I think drawing is what helped me overcome that language barrier. It’s really hard to make friends at first, particularly when you can’t communicate very well. But it’s easier if you’re good at something else. ‘Hey — I can’t talk to you, but I can do this!'”

Storet was no stranger to learning a new language, however. At the age of 7, her family moved from their home in Brussels, Belgium, to Austria, where Storet had to learn German. The move didn’t seem to phase the young artist, however, as she took her love of art and turned it into a bonding tool with her fellow Austrian classmates.

Those drawings often led her into trouble.

“I was always a huge distraction to the class,” she said, again smirking. “I do remember this one time I drew a sketch of a substitute teacher. It was parody, caricature, and my friend got caught with it. She got in trouble, and I didn’t. I still feel bad about that, and I was 9 at the time.”

Storet had fined tuned her drawing skills throughout early childhood, watching her mother doodle sketches of designer women’s clothes and shoes as she chatted on the telephone. Storet said she would take her mother’s drawings and copy them onto her own papers and then re-create them from memory.

But, at this impressionable age, her mother’s drawings weren’t enough to keep the child satisfied.

“I remember once I was watching TV and I was thought ‘I bet could draw that cartoon,'” she said. “But we didn’t have pause buttons back then so I would watch it and try to redraw it carefully, quickly. The best memory of my teaching myself to draw was back when I was 7 or 8.”

The cartooning and fashion design greatly influenced her artwork, she said, leading her to develop a style similar to Surrealism, Impressionism and German Expressionism. “My drawing is all those things put together,” she said. “It’s all or each, either or. German Expressionism is in the paintings. In the drawing, it’s more illustrative or narrative. Sometimes it’s hard to define.

“But it represents me,” she continued. “Art has a lot to do with how you present yourself to the world. It’s not just how you draw, it’s how you compose yourself. It’s like language. It’s the basis of identity, art is.”

We met a few years ago through a friend. I just like the way he thinks.

Joelle Storet has only just turned 26, and although she has already considerable success in her short career, it seems to be only just getting starting.

“She’s always been an artist,” said Matt Dayer, owner of Thou ART Joelle in Fayetteville. “A lot of this she does herself. I help her when she needs someone to help her.”

Incorporated on May 29, 2014, the art and clothing company is a conglomeration of Storet’s talent and Dayer’s business sense. Together, the creators of Thou ART Joelle have sold countless posters, T-shirts and commissioned murals. The two met by accident in the winter of 2012 and quickly became inseparable, they said, and work closely to make their small start-up a success.

“I try to keep her on track a little,” Dayer said with a laugh.

“He takes things in different directions than I would have thought of,” she said. “We’re total opposites. But he I think he saw more to me than just what I was doing. He’s really good at what he does, and I’m really good at what I do. Maybe it was just meant to be.”

While designing new shirts and custom murals, Storet looks to the future as she pursues a second bachelor’s degree — this time in art history — from the University of Arkansas and begins teaching at Community Creative Center, which she says brings her absolute joy.

“I never knew what I wanted to do, so I just let it develop naturally,” she said. “But the one thing I know I want to do is teach. The future is hard for me to perceive because I am just so into the now. The future is just inevitable. I let the future surprise me. Let it take me where it wants to go. Hopefully in a good direction.”

Storet’s calendar is very full. All at once she is an artist, student, teacher and small business owner and accepts each position with grace and serenity. She is busy, but it’s hard to tell by looking at her.

Unless someone looks at her eyes.

Link to the article can be found here.