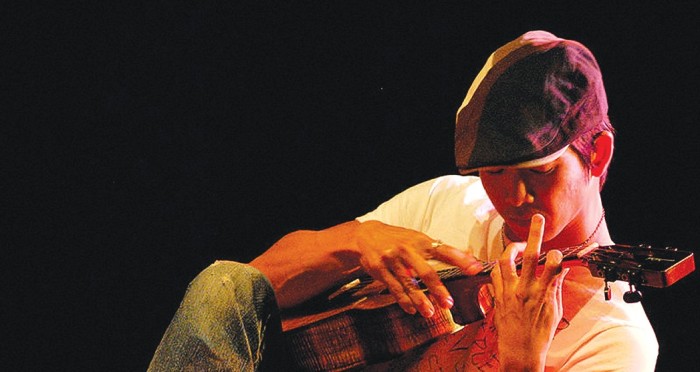 Jake Shimabukuro is going to be cold. Really cold.

Reluctantly leaving behind wife and young son, the Hawaii native is traveling to Northwest Arkansas for the first time this week, and he may be realizing he should have packed more than T-shirts.

“Anything under 70 degrees for me is cold,” says the 38-year-old ukulele player with a laugh. “I looked up the weather for the day I’ll be there. It’s definitely going to be a change for me.”

Despite the cold, Shimabukuro will be bringing the warm sounds of the island state to the Walton Arts Center tonight for an evening of music pulled straight from his childhood.

“My mother played the ukulele, and ukulele music was played all over local radio stations,” he says. “I thought it was just cool to play. My mom sat me down and taught me. I was hooked.”

Shimabukuro’s mother gave him a ukulele — which roughly translated means “jumping flea” — at the age of 4, and the young musician’s affinity for the instrument was apparent from the start.

He played for hours every day, he says, eventually outgrowing his mother’s teaching abilities. Within a few years, Shimabukuro was taking lessons from Tami Akiyami at Roy Sakuma Studios. He fine-tuned his skills to prepare for a career in music, ultimately leading to a contract with Sony Japan.

“I was so excited because I didn’t see anyone being interested in a solo ukulele player,” he says. “When I was signed by Sony Japan — it made me think I was really on to something here. I always knew I would play the rest of my life, I just didn’t know I would do it for a living. I love what I do.”

And his love of the instrument was infectious.

Little brother Bruce followed in Shimabukuro’s footsteps, first being taught by his brother and then becoming a ukulele teacher and professional player himself.

“My mother taught me, and I taught my brother,” he says. “As we got older, however, we needed further training. But Mom taught us the basic chords and gave us a foundation.”

Shimabukuro credits his mother for more that just a basic ukulele education. Her love of traditional ukulele music has stayed with the musician, influencing his compositions and continuing to be the style he’s most comfortable playing, he says.

But Shimabukuro is not necessarily known for his traditional approach.

The ukulele player has a fast-paced, energetic and modern style, utilizing complex finger-work to interpret popular music such as Queen’s “Bohemian Rhapsody,” in a way that is both new and familiar to the audience, he says.

“‘Bohemian Rhapsody’ was one of the more challenging pieces to arrange,” he says with a laugh. “As with other pieces, I hummed the melody and noted it, creating a skeleton. The hardest part was the ‘thunderbolts of lightning’ line. It seems straightforward, but it was incredibly difficult to find the melody there.”

Shimabukuro spent a week on that one line, transforming a multi-voice melody into a singular notes, he says.

“There are just so many things going on there,” he says, again laughing. “My question was how do I play that section and still make the listener satisfied?”

He accomplished that ambition, making the 1975 song the most popular he plays on four strings.

“I just wanted people to hear the song from beginning to end without missing anything,” he says. “I wanted it to sound full, even at four notes at a time.”

And audiences have been delighted.

“I am so excited when I am up there, I feel like a kid and I think the audience can feel that,” he says. “I want people to walk out smiling and feeling refreshed and energized, whether they laugh, are quiet or cry. They’ll feel like they have let it all out of them.”

Link to the article can be found here.